Protecting and improving the health and enjoyment of the District's waterways

Go
X
Planning Priority W12
In giving effect to A Metropolis of Three Cities, this Planning Priority delivers on the following objectives and the corresponding strategies:
Objective 25
The coast and waterways are protected and healthier

While parts of the Western City District are the hottest and driest in Greater Sydney, its waterways shape its landscape and character. They are natural assets, cultural resources and recreational destinations. As the District grows, greater housing density around waterways, and more people using waterways for recreation and irrigation, will mean that these assets will need to be carefully managed so they continue to support a wide range of activities. The District's catchments and waterways are shown on Figure 20.

The waterways and rivers of the District are part of an overall natural system and contribute to the green infrastructure that cools and greens the District. The District's waterways support groundwater-dependant ecosystems, which benefit from continuing protection and management. They support threatened ecological communities and accommodate the disposal of stormwater and wastewater. More than 75 per cent of the District's population lives within a kilometre of a waterway (many of these are intermittent), highlighting the role of waterways in creating a sense of place and connecting communities to the natural landscape, even within a relatively hot and dry landscape.

The District's three major waterways - the Hawkesbury-Nepean River, South Creek and the Georges River - are key elements of the District's landscape and character. Some of the District's waterways - such as the Grose and Colo rivers, which are important tributaries of the Hawkesbury-Nepean River - are in a near-natural state and protected in World Heritage Listed national parks. Significant swamps and wetlands include the Blue Mountains Swamps, Cranebrook Wetlands and the Georges River Voyager Point Wetlands. These provide habitat for threatened species and help to filter and clean water as it flows into creeks and waterfalls.

Many of the District's waterways have extensive floodplains. The Hawkesbury-Nepean Valley between Wallacia and Sackville, and parts of South Creek Valley have the greatest flood exposure of any valley in NSW. The District Plan addresses resilience to flooding and other hazards in more detail in Planning Priority W20.

A legacy of historical land uses, contaminated land and groundwater, aged infrastructure and the pattern of urban development have impacted some of the District's waterways. Upper reaches of many waterways are healthy, while downstream stretches are affected by urbanisation, agriculture and water extraction. Other waterways, such as the Georges River, are in better health, provide habitat and are popular for swimming.

Urban development, the clearing of vegetation and an increase in impermeable surfaces have resulted in large quantities of stormwater run-off, reduced water quality and loss of habitat. Urban stormwater carries litter and contaminants into the District's waterways. The District's waterways often flow through more than one local government area and are managed by a number of State agencies and stakeholders, so water quality and waterway health is best managed at a catchment and sub-catchment level. 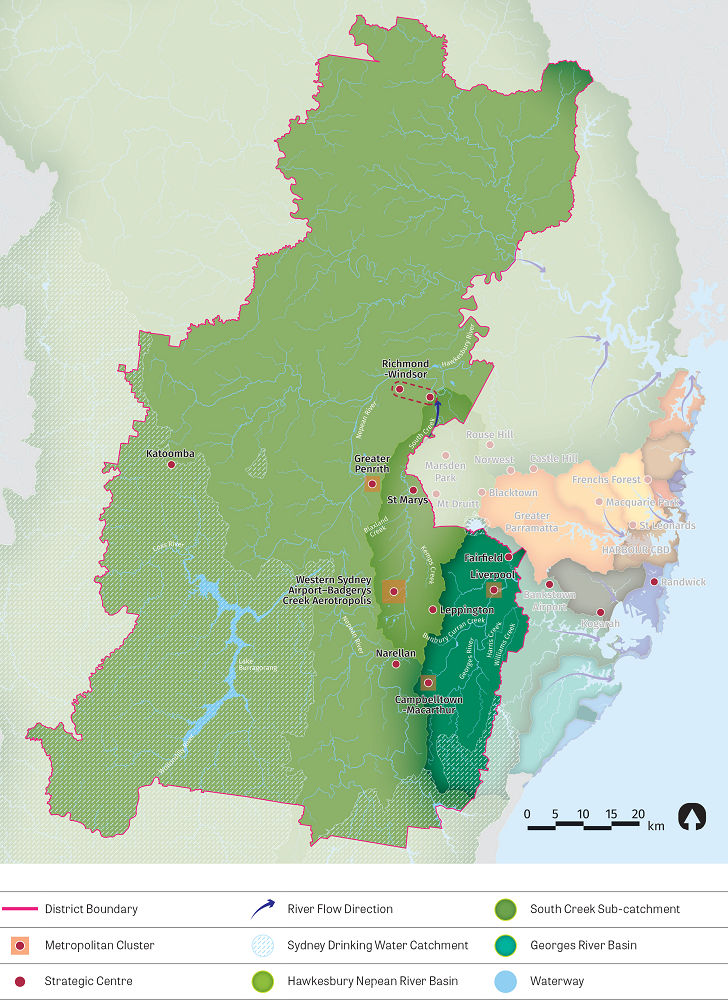 Enhancing community access to the waterways within the District should be prioritised. This includes access for swimmers and pedestrians as well as boats and other watercraft. The delivery of the Greater Sydney Green Grid connections (refer to Planning Priority W15) will enhance connections to the Hawkesbury-Nepean River and the Georges River.

Legislation, policies and plans, are in place to improve the health of waterways and to manage water resources. For example, the Fisheries Management Act 1994 protects aquatic biodiversity and the Sydney Regional Environmental Plan No. 20 - Hawkesbury-Nepean River protects the Hawkesbury-Nepean River system by ensuring that the impacts of future land uses are considered in a regional context. The NSW Water Quality and River Flow Objectives identify the high-level goals for several catchments in the District. State agencies and councils also manage the health of waterways through planning and development decisions, environmental programs and the management of public land.

The Metropolitan Water Plan 2017 is the NSW Government's plan to ensure there is sufficient water to meet the needs of the people and environment of Greater Sydney now and for the future. The NSW Government's WaterSmart Cities Program, will explore new ways to supply drinking water, and manage stormwater and wastewater in a more integrated, cost-effective and sustainable way.

For local waterways, where governance and ownership of the waterway can be highly fragmented, a green infrastructure approach, which values waterways as infrastructure, can lead to more innovative management of waterways with outcomes that better reflect community expectations.

The District Plan aims to integrate the objectives for waterways, which are set out in legislation, policies and plans, by prioritising the management of waterways as green infrastructure. This involves:

An integrated approach to the protection and management of waterways will also rely on more comprehensive approaches to the monitoring and reporting of water quality and waterway health. Councils implement sustainable urban water management approaches and encourage water sensitive urban design.

Collaboration and coordination across levels of government and with the community is needed to deliver the green space, urban cooling and integrated water management outcomes for the District.

Catchment-scale management and coordination can:

Strategic planning needs to manage the cumulative impacts of activities and associated infrastructure, such as boat launching facilities, while ensuring public access and opportunities for swimming, and small boat and kayak launching from publicly owned land. Access to waterways should not compromise the integrity of environmentally sensitive aquatic and riparian habitats.

The Hawkesbury-Nepean River has a 21,400 square kilometre catchment - one of the State's largest catchments east of the Great Dividing Range. The river system extends beyond the boundaries of Greater Sydney, stretching from the south of Goulburn, and the west of Lithgow to the Brooklyn Bridge in the north. The river and its tributaries flow through remote bushland and mountainous terrain, fertile agricultural land and urbanised areas, and join the ocean at a spectacular estuary.

The river system provides drinking water to most of Greater Sydney, the Illawarra and Central Coast, with major water storages at Warragamba Dam, Nepean Dam, Avon Dam, Cordeaux Dam, Cataract Dam and Mangrove Dam. The river system also supports a $259 million agriculture industry21. Its water quality and health can be threatened from the impacts of urban and rural stormwater run-off, mining, wastewater discharges and water extractions for irrigation and drinking water supply.

South Creek is Western Sydney's longest urban freshwater creek, rising near Oran Park and joining the Hawkesbury River near Windsor. Its catchment includes well-established urban areas, new and rapidly growing neighbourhoods and rural land. Rural activity and urban development have affected the health and liveability of the creek and the Hawkesbury River downstream.

Significant population growth will occur within the catchment, particularly in new neighbourhoods being planned within the South West and the Western Sydney Airport growth areas. Population growth, as well as growth in economic activity and the delivery of infrastructure to support Western Sydney Airport and the Badgerys Creek Aerotropolis, will provide an opportunity for better management to enhance and improve the health of South Creek and its tributaries.

As the District grows, greater housing density around waterways, and more people looking to use waterways for recreation, will mean that these assets will need to be carefully managed so that they continue to support a wide range of activities. The size of the South Creek corridor, its character and the scale of growth expected over the next few decades will require specific approaches, which are set out in Planning Priority W13.

Infrastructure NSW, in collaboration with the Greater Sydney Commission, is leading a whole-of-government project for the South Creek corridor that will inform the planning of a cooler and greener Western Parkland City.

The Georges River is a major feature of the Western City District, the Central River City and, as it flows east, the Eastern Harbour City. Flooding in the Georges River valley can affect communities in places such as Liverpool, Warwick Farm, Lansvale and Lansdowne, with areas of greater risk in Chipping Norton and Moorebank. Its catchment flows through a varied landscape from the steep, heavily wooded upper reaches near Appin to the urbanised lower reaches. Vegetation communities in the catchment are primarily influenced by distribution of shale (Cumberland Plain) and sandstone (Woronora Plateau) geologies.

Woronora Dam and Prospect Reservoir - both within the Georges River catchment - are part of Greater Sydney's drinking water supply network. Tributaries include important creeks such as Cabramatta Creek and Prospect Creek which flow through suburban and urban areas of Fairfield and Liverpool. The river provides a riverside setting for Liverpool strategic centre and flows through Chipping Norton Lakes, providing an attractive location for waterside recreation.

Enhance sustainability and liveability by improving and managing access to waterways and foreshores for recreation, tourism, cultural events and water-based transport.

Improve the health of catchments and waterways through a risk-based approach to managing the cumulative impacts of development including coordinated monitoring of outcomes.

Download this plan in PDF (10.07 MB)
Favourite this section
Jump to my favourites