Protecting and enhancing bushland and biodiversity

Go
X
Planning Priority W14
In giving effect to A Metropolis of Three Cities, this Planning Priority delivers on the following objectives and the corresponding strategies:
Objective 27
Biodiversity is protected, urban bushland and remnant vegetation is enhanced

Objective 27 in A Metropolis of Three Cities outlines how the NSW Government seeks to protect and manage biodiversity values across Greater Sydney, from national and State biodiversity conservation legislation to information such as biodiversity mapping. This Planning Priority reinforces the importance of Objective 27 and provides a context to District issues.

Bushland covers approximately 60 per cent of the Western City District22. Most of this bushland is located in the Protected Natural Area with the major landscape area at the western edge of the District. This includes the Greater Blue Mountains World Heritage Area, which has shaped the distinctive settlement patterns of the towns and villages of the Blue Mountains. There are valuable areas of bushland and remnant vegetation within the urban and rural parts of the District as well (refer to Figure 23).

Many areas of urban bushland on publicly owned land are managed as green infrastructure by councils, while some are on privately owned land.

Urban bushland, close to some of the District's most densely populated areas, supports opportunities for nature-based recreation and enhance liveability. Areas of bushland at the edges of urban neighbourhoods need to be managed and enhanced to reduce edge-effect impacts, such as pollution and nutrients from stormwater runoff, weeds, domestic pets, litter and unmanaged or informal recreation trails.

In delivering the Western Parkland City, strategies must be developed for the identification, protection and management of bushland and biodiversity enhancement.

A strategic approach to protecting the biodiversity in the Western City District involves investing in connected bushland corridors and protecting larger pockets of remnant vegetation, as large and connected areas of bushland give the District's wildlife the greatest chance of survival. Councils are also working together to map opportunities to restore and reconnect areas of habitat in established urban areas. This strategic approach complements the delivery of the Greater Sydney Green Grid. Selected species of trees and under-storey plants for parks and street planning in targeted areas support the movement of wildlife and help strengthen connections between areas of habitat.

Strengthening the protection of bushland in urban areas will help to conserve the District's biodiversity, preserve its scenic landscape, and enhance its tourist and recreational values.

Remnant vegetation should be recognised as an asset that can be incorporated into the planning and design of neighbourhoods, for example in parks, school grounds and as street trees.

Bushland in the District's rural areas will be protected and managed through place-based planning and incentivised as potential biodiversity offsets.

The Biodiversity Conservation Act 2016 provides a framework and tools to avoid, minimise and offset impacts on biodiversity through the planning and development assessment process. There are a range of tools available to protect biodiversity stewardship agreement, conservation agreements and wildlife refuge agreements. 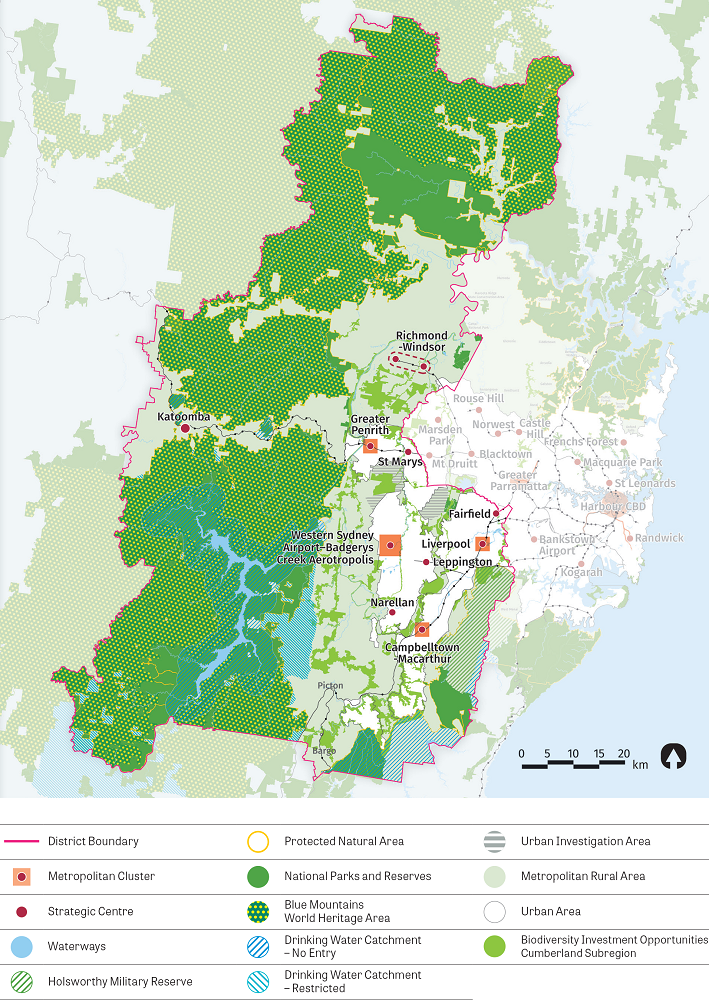 Protect and enhance biodiversity by:

Download this plan in PDF (10.07 MB)
Favourite this section
Jump to my favourites