Go
X
Planning Priority W17
In giving effect to A Metropolis of Three Cities, this Planning
Priority delivers on the following objectives and the corresponding
strategies:

Objective 29: Environmental, social and economic values in rural areas are protected and enhanced

The District's rural areas are framed by bushland and national parks to the west, and cover 28 per cent of the District (refer to Figure 23). They include the floodplains along the Hawkesbury River, the historic Mulgoa Valley, the hills and steep ridgelines of Campbelltown and Wollondilly Shire, and areas of outstanding cultural heritage value.

The District's rural areas include poultry, egg production and dairy activities, irrigated horticulture such as leaf vegetables and mushrooms, and nurseries for cut flowers and turf.

The Western Sydney Airport will be a catalyst for agricultural export from the region.

There are extractive industries based on construction material resources through the District, with major concentrations of construction sand around Londonderry and the Hawkesbury River, as well as clay and shale resources for brick and tile manufacture, particularly around Horsley Park, Bringelly and Oran Park. Sourcing construction materials locally minimises transport requirements, and reduces cost, environmental footprint and social impact of construction, supporting growth in the Greater Sydney Region.

Mineral resources of sand, clay and aggregate are used for construction materials that supply housing and infrastructure across the Greater Sydney Region. Retaining access to those construction material resources in the metropolitan rural areas and some urban areas of the Greater Sydney Region minimises transport requirements. It also reduces the cost, environmental footprint and social impact of construction, supporting continued growth and affordability of development, infrastructure and housing.

Land use planning can respond to the lifecycle of mineral resources through a multiple or sequential use of land. For instance, under a multiple use-of-land approach compatible activities such as brickworks or landfills may be located on or near land also used for mineral resource operations. Alternatively, the successful rehabilitation of land after a resource has been extracted can enable the sequential use of land, such as the Penrith Lakes area, where redeveloped sand and aggregate quarries are now a series of recreational lakes, including the Sydney International Regatta Centre. These approaches aim to achieve a balanced approach to land use that maximises environmental, social and economic benefits for the community.

A Metropolis of Three Cities takes a strategic approach to delivering Greater Sydney's future housing needs within the current boundary of the Urban Area including Growth Areas. Urban development in the Metropolitan Rural Area will only be considered in the urban investigation areas identified in A Metropolis of Three Cities. This approach complements Action 30 of this plan to protect and support agricultural production and mineral resources be preventing inappropriately dispersed urban activities in rural areas.

To the north of the Western Sydney Airport Growth Area, two areas form part of the Greater Penrith to Eastern Creek Growth Area:

The Defence Establishment Orchard Hills land has been included in the Growth Area Investigation to ensure coordination of existing and future land uses in the corridor.

To the east of the Western Sydney Airport Growth Area is a third area:

The rural towns and villages of the District contain some of Greater Sydney's best examples of early colonial buildings and heritage. With a long history of providing a supportive role to rural land uses, these towns and villages also provide access to shops and services for nearby rural communities, as well as a variety of recreational activities and open space areas for visitors from across Greater Sydney to enjoy.

The towns and villages of the Blue Mountains, while located in the metropolitan rural area, form an urban corridor set upon a narrow sandstone plateau that links Greater Sydney with Western NSW. The distinctive history of the Blue Mountains is reflected in the built and natural environment of great heritage value.

Maintaining and enhancing the distinctive character of each rural and bushland town and village is a high priority. Ongoing planning and management of rural towns and villages will need to respond to local demand for growth, the character of the town or village and the surrounding landscape and rural activities. Rural and bushland towns and villages will not play a role in meeting regional or district scale demand for residential growth.

Parts of the urban-rural fringe are owned by the Deerubbin Local Aboriginal Land Council. Future planning of these areas may require flexibility in order to balance rural values with the objectives of greater economic participation and community and cultural use of these areas by Aboriginal people.

Design-led place-based planning in the Metropolitan Rural Area will help manage environmental, social and economic values, maximise the productive use of rural areas, and incentivise biodiversity protection for remnant bushland vegetation. Design-led planning at the landscape unit scale will provide councils with a process to engage more effectively with stakeholders, examine complex issues more clearly, identify important rural values at a local scale and set priorities for maintaining and enhancing these values through local land use planning.

Increased demand for biodiversity offset sites and limiting urban development in the Metropolitan Rural Area will help make it more attractive for landowners to protect biodiversity on private land through stewardship agreements.

The Western Sydney Airport will be a catalyst for agricultural exports from the region, with the District retaining significant peri-urban agricultural production. Current Western City District research and agricultural initiatives include: 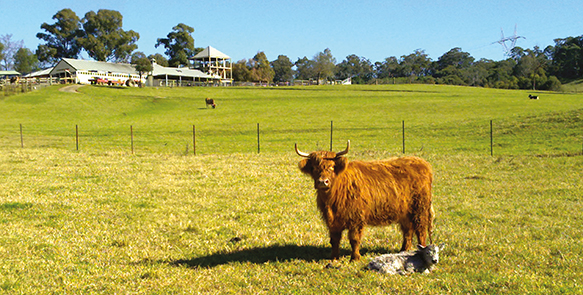 Councils and other planning authorities

Limit urban development to within the Urban Area, except for the investigation areas at Horsley Park, Orchard Hills, and east of The Northern Road, Luddenham.