Home What we do Projects Western Sydney PIC Program

The Western Parkland City is already growing and we need to think carefully about what, where and when infrastructure is needed for those people who live, work and play and do business in the city.

As part of the Western Sydney City Deal, the Greater Sydney Commission is leading the delivery of the Place-based Infrastructure Compact (PIC) program for the NSW Government.

The initial PIC area sits in the centre of the Western Parkland City and covers over 36,000 hectares of land, from Greater Penrith to Eastern Creek and south to Glenfield.

With the Western Sydney International Airport and Aerotropolis at its heart, this area will support strategic centres across the Western Parkland City, generating a range of new jobs for workers across the city.

With support from more than 30 government agencies, utility providers and Councils, the Commission has applied the PIC process to three key regions in the Western Parkland City initial PIC area: 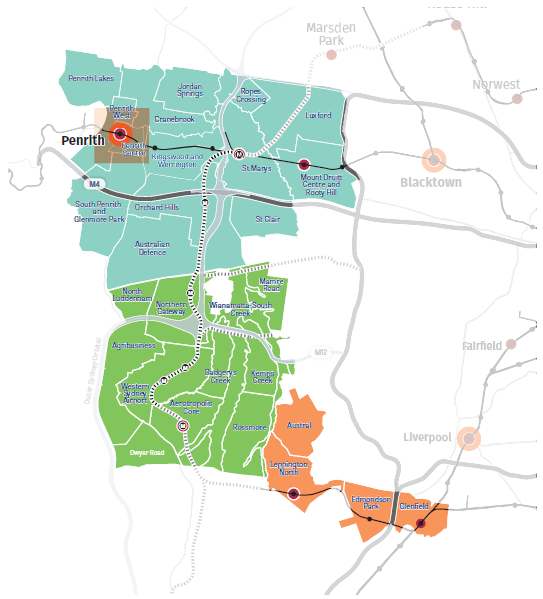 This 19,200-hectare area includes Penrith CBD, St Marys, Mount Druitt and Rooty Hill. It is bounded by the Nepean River and The Northern Road to the west, the Castlereagh Connection to the north, the M7 Motorway to the east and the Warragamba to Prospect water pipeline to the south. It sits within Blacktown and Penrith local government areas.

The Austral to Glenfield Corridor covers 3,650 hectares of land. It is located east of the Western Sydney Aerotropolis and includes the suburbs of Austral, Leppington North, Edmondson Park and Glenfield. It takes in parts of the local government areas of Liverpool, Camden and Campbelltown and is bounded by Georges River to the east.

The following report provides a summary of the feedback received.

What is a PIC?

A PIC is a collaborative planning model that is all about creating great places by planning for the right infrastructure and services, in the right places, at the right time.

The PIC provides a collaborative way for NSW Government agencies, utility providers and local councils to answer critical questions such as:

For the people who will live and work in Western Sydney in the future, the PIC model will mean:

What is the Western Sydney City Deal?

The Western Sydney City Deal is a shared commitment of the Australian, NSW and local governments to create world-class jobs and a great quality of life through the vision of the Western Parkland City.