The urban tree canopy is a form of green infrastructure providing shade, which reduces ambient temperatures and mitigates the heat island effect. The urban heat island effect is where large amounts of hard and dark-coloured surfaces like roads and roofs cause localised warming (refer to Objective 38).

Every 10 per cent increase in tree canopy cover can reduce land surface temperatures by 1.13 degrees Celsius52.

The urban tree canopy also has environmental benefits. It provides habitat, helps protect the health of waterways and removes fine particles from the air to improve air quality. Recent research shows that urban tree canopy is greatly valued by communities. A 10 per cent increase in street tree canopy can increase the value of properties by an average of $50,00053.

Urban tree canopy along streets and in the public domain contributes to the Greater Sydney Green Grid and makes walking and cycling more appealing. Greater Sydney’s urban tree canopy is made up of trees along streets, in parks and other public spaces, and on privately owned land including front and backyards. It includes native vegetation and exotic and deciduous trees (refer to Figure 52).

As Greater Sydney grows and urban areas become denser, extending urban tree canopy is one of the most effective ways to improve amenity. A target has been set to increase tree canopy cover to 40 per cent, up from the current 23 per cent. Urban tree canopy can be complemented by green ground cover, rain gardens, green roofs and green walls.

Challenges to extending urban tree canopy include the lack of sufficient space within existing street corridors, and the competition for space with other forms of infrastructure both above and below the ground. Opportunities to relocate powerlines underground or bundle them may be explored at a local or precinct scale, particularly in areas experiencing urban renewal, to provide space for the urban tree canopy and enhance the public domain. Extending urban tree canopy should be balanced with the need to allow sunlight into homes and onto roofs for solar power.

The NSW Department of Planning and Environment has prepared the draft Greenfield Housing Code, which will help to provide more space for trees in both front and backyards in new residential areas. To complement this, up to 5,000 trees a year will be provided over the next three years, under the Free Tree Initiative, to owners of new homes approved under the complying development code in Greater Sydney’s greenfield areas 54.

Several councils have developed innovative strategies, such as Sutherland Council’s Greenweb program, to enhance and extend the urban tree canopy 55. 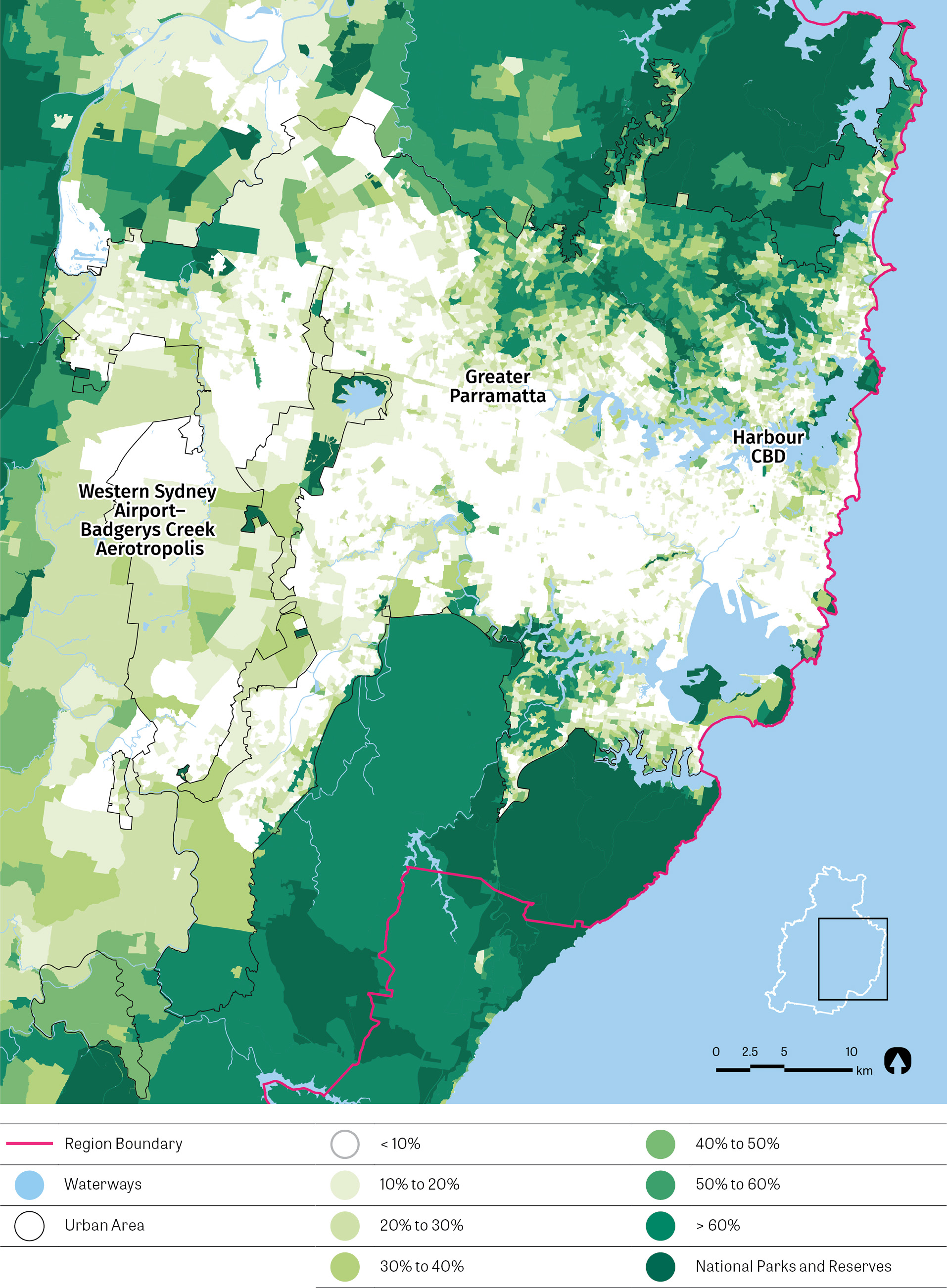 Related government initiatives:
You are here:
A Metropolis of Three Cities
Chapter:
Sustainability
Direction:
A city in its landscape
Favourite this section