Freight and logistics network is competitive and efficient

Greater Sydney’s freight task is forecast to almost double in the next 40 years. There is an increasing importance placed on 24/7 supply chain operations to maintain Greater Sydney’s global competitiveness. This forecast increase in the movement of goods will require a freight network that can support safe, efficient and reliable journeys between centres, freight precincts, trade gateways and intermodal terminals across Greater Sydney. It is important that locations around key freight networks are not adversely affected by traffic patterns or increased congestion, creating barriers to 24/7 freight operations.

The traditional manufacturing, transport, distribution, warehousing and intermodal functions found across Greater Sydney underpin the creation and success of global value chains, which in turn support trade through Port Botany and Sydney Airport.

The Western Parkland City has the largest supply of industrial lands in Greater Sydney. There is also substantial future industrial land supply that is yet to be developed, together with two planned intermodal terminals, that will support large-scale logistics growth. In addition to Port Botany, the Eastern Harbour City contains four of Greater Sydney’s 10 intermodal terminals and will therefore have an ongoing role in large-scale freight and logistics for the foreseeable future.

Port Botany and Sydney Airport are Greater Sydney’s two nationally significant trade gateways. Both have significant growth projected with container traffic at Port Botany projected to grow from 2.36 million TEU (twenty-foot equivalent unit – a standard container measure) to 7.34 million TEU by 2056 and passenger trips at Sydney Airport are forecast to grow from 37 million to 74 million passengers by 203323. The trade gateways have substantial areas of industrial land in their immediate environs providing support services and 24/7 supply chain operators served by substantial road and rail infrastructure – both critical to their operations.

Retaining internationally competitive operations at both these locations is vital for a productive NSW economy. Preventing the encroachment of sensitive uses that can impact on these operations and ensuring transport networks can support the needs of the trade gateways is of national significance.

The forecast TEU growth is beyond the future capacity of Port Botany. This growth will trigger the need to develop an additional container port location to service Greater Sydney’s logistic needs. This is most likely to be Port Kembla which has approval to expand container handling capacity at a cost of $1 billion. This will help manage some projected growth, but not all.

With the development of the Western Sydney Airport and Badgerys Creek Aerotropolis it will be critical, from the outset, to secure the access requirements for the airport and off-site industrial land for its 24/7 operation. It will also be critical to plan and protect from encroachment the freight corridors that serve the airport and industrial lands. A draft Structure Plan for the Western Sydney Airport Growth Area is being prepared to achieve this (refer to Objective 20).

Bankstown Airport currently caters for fixed wing and helicopter flight training, charter flights, air freight and emergency services. The airport is also the location of significant aviation and non-aviation related businesses within its 313 hectares. Up to 130 hectares of the site are occupied by a mix of industrial, commercial and retail tenancies, vacant sites, or have been identified as suitable for release for development. Protecting the site’s operational activities is important24.

A statewide approach to implementing the National Airports Safeguarding Framework is being developed by the NSW Department of Planning and Environment, to improve amenity and safety, and support ongoing aviation at Sydney, Bankstown and Camden airports, at the RAAF Base Richmond, as well as the future Western Sydney Airport.

The port precinct at Glebe Island and White Bay is critical to the bulk construction materials supply chain for concrete, the cruise industry and the provision of essential services to the region’s economy. It offers a land–water interface, essential to current and future industrial heavy commercial uses, which could not be easily replaced within Sydney Harbour and for which there are currently few, if any, feasible and sustainable alternatives.

Manage the interfaces of industrial areas, trade gateways and intermodal facilities by:

Greater Sydney’s freight task is forecast to more than double in the next 40 years. Policies and investment to reduce the cost of moving freight and increase efficiency and productivity while minimising traffic and amenity impacts on adjacent urban uses are essential.

The freight network needs to support future demand – allowing movements that deliver food and other goods and provide the materials required to build the city. Providing for a growing Greater Sydney requires an efficient and effective road and rail freight network integrated with ports and airports. Figure 30 shows strategic freight corridors and intermodal terminals that will be required by 2056.

Most of Greater Sydney’s freight is moved on the road network. The current higher levels of congestion over long periods of the day impede freight operations and increase business costs. Rail-based freight movements are restricted where networks are shared with passenger services.

Major improvements are planned. In particular, a dedicated freight rail connection from Port Botany to the Western Parkland City is being investigated to increase the proportion of freight moved by rail. 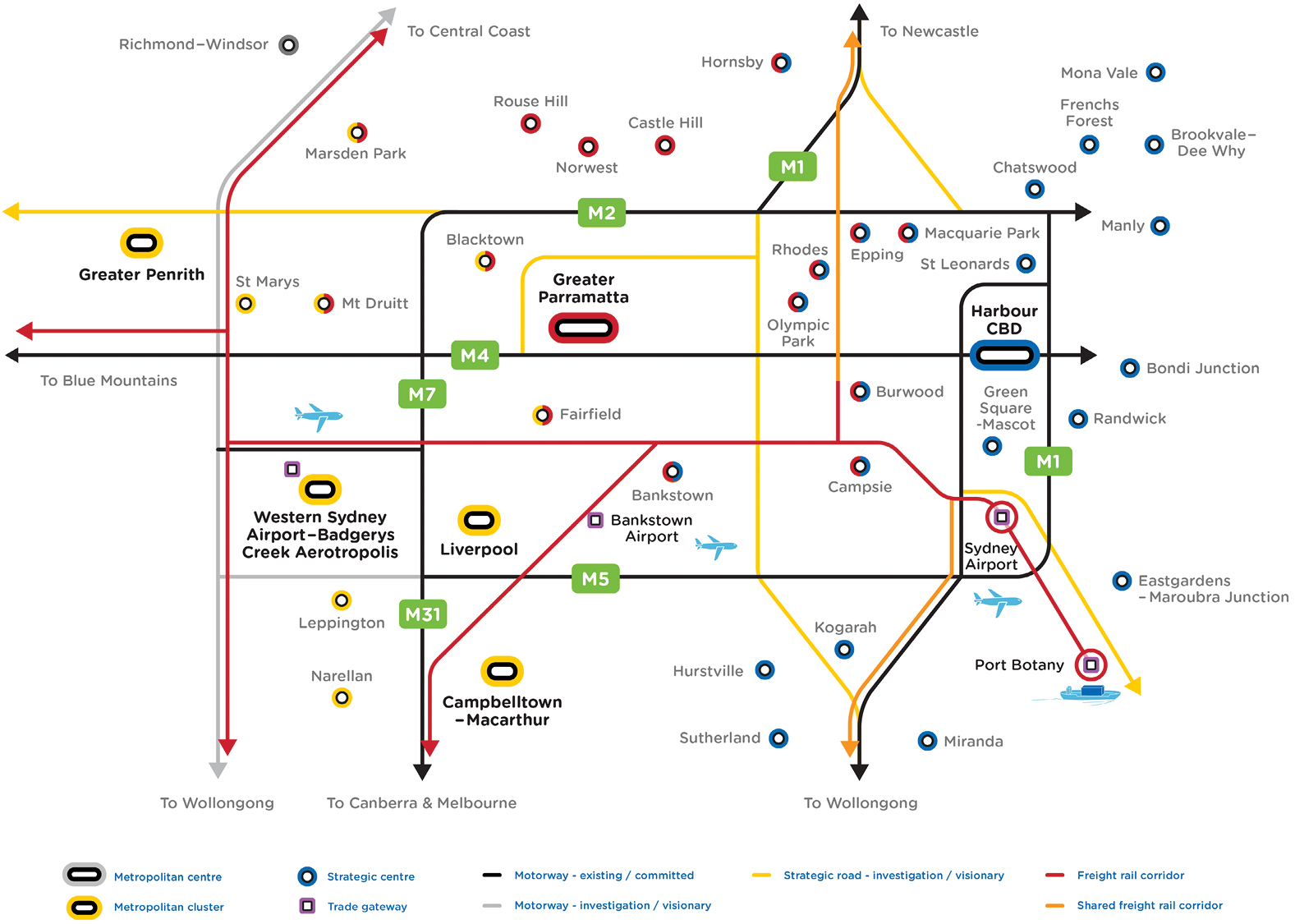 This will boost the economic potential of surrounding industrial precincts in Western Sydney such as Smithfield and Wetherill Park.

With this investment comes the commensurate need to maintain buffers to nearby residential areas and restrict further encroachment by residential uses.

Increasing land values in the Central and Eastern cities, major inland intermodal terminals such as at Moorebank, and plans for the new curfew-free Western Sydney Airport support the momentum for major freight and logistics operations to gravitate further west.

Demand for centrally located resources for parcel deliveries is increasing with online shopping and fast-shipping expectations. Consumers require a more diverse range of products and services to be delivered either directly to their homes, or to nearby commercial and retail hubs. On-street car parking capacity and loading zones affect the delivery of goods.

There is a need to adjust the regulatory environment and planning decisions to support the growing demand for parcel deliveries and on-demand freight in a sustainable manner, including facilitating secure parcel drop points co-located with centres and transport interchanges.

Optimise the efficiency and effectiveness of the freight handling and logistics network by:

You are here:
A Metropolis of Three Cities
Chapter:
Productivity
Direction:
A well-connected city
Favourite this section

Download this plan in PDF (16.01 MB)
Jump to previous section Previous section The Eastern, GPOP and Western Economic Corridors are better connected and more competitive
Back to top
Jump to next section Next section Regional connectivity is enhanced