Parramatta has a long history as a significant meeting place prior to colonial settlement. Parramatta, as it is known today was settled the same year as Sydney Cove and has had a long and important role in the growth of Greater Sydney.

The 1968 Sydney Region Outline Plan identified that Parramatta should become 'a very major commercial employment centre.' This was the first time that Parramatta was distinguished from other centres across Greater Sydney. By the time of the next plan in 1988, the designation of Parramatta had been elevated to be equivalent to the Sydney CBD.

Since that time, the progressive relocation of State agencies from the Eastern Harbour City to Parramatta has solidified Greater Parramatta as a major office market. It now has approximately 700,000 square metres of office space27.

Greater Parramatta is at the core of the Central River City, encompassing Parramatta CBD, Parramatta North and the Westmead health and education precinct, connected via Parramatta Park (refer to Figure 33).

Today Greater Parramatta has close to 82,000 jobs with a diversity of activities including significant government and civic administration, businesses, major health and education institutions and significant lifestyle activities such as restaurants and theatres.

Greater Parramatta's role as a metropolitan centre is entering a period of transformational change, driven by an unprecedented level of government and institutional investments into health, education, recreation, culture, entertainment and amenity improvements. These include:

Greater Parramatta's potential is also being enhanced by the activities of a wider State and local government initiative - the GPOP (refer to Objective 15).

Greater Parramatta is one of the largest integrated health, research, education and training precincts in Australia and is a key provider of jobs for the Central River City. Westmead Hospital provides health services to almost 10 per cent of Australia's population. By 2026, the Westmead Hospital precinct will have over 2.8 million outpatient visits and over 160,000 emergency department presentations every year.

Westmead Hospital is leading innovation in the Central River City and is a major contributor to the Australian Government's National Innovation and Science Agenda through its training of world leading scientists, scientific analysis and successful global collaborations.

A range of activities is underway which will boost the role of the Westmead health and education precinct as an economic catalyst for Greater Parramatta, including28:

Parramatta Council has a planning proposal to amend the planning controls for the Parramatta CBD. The proposal seeks to: 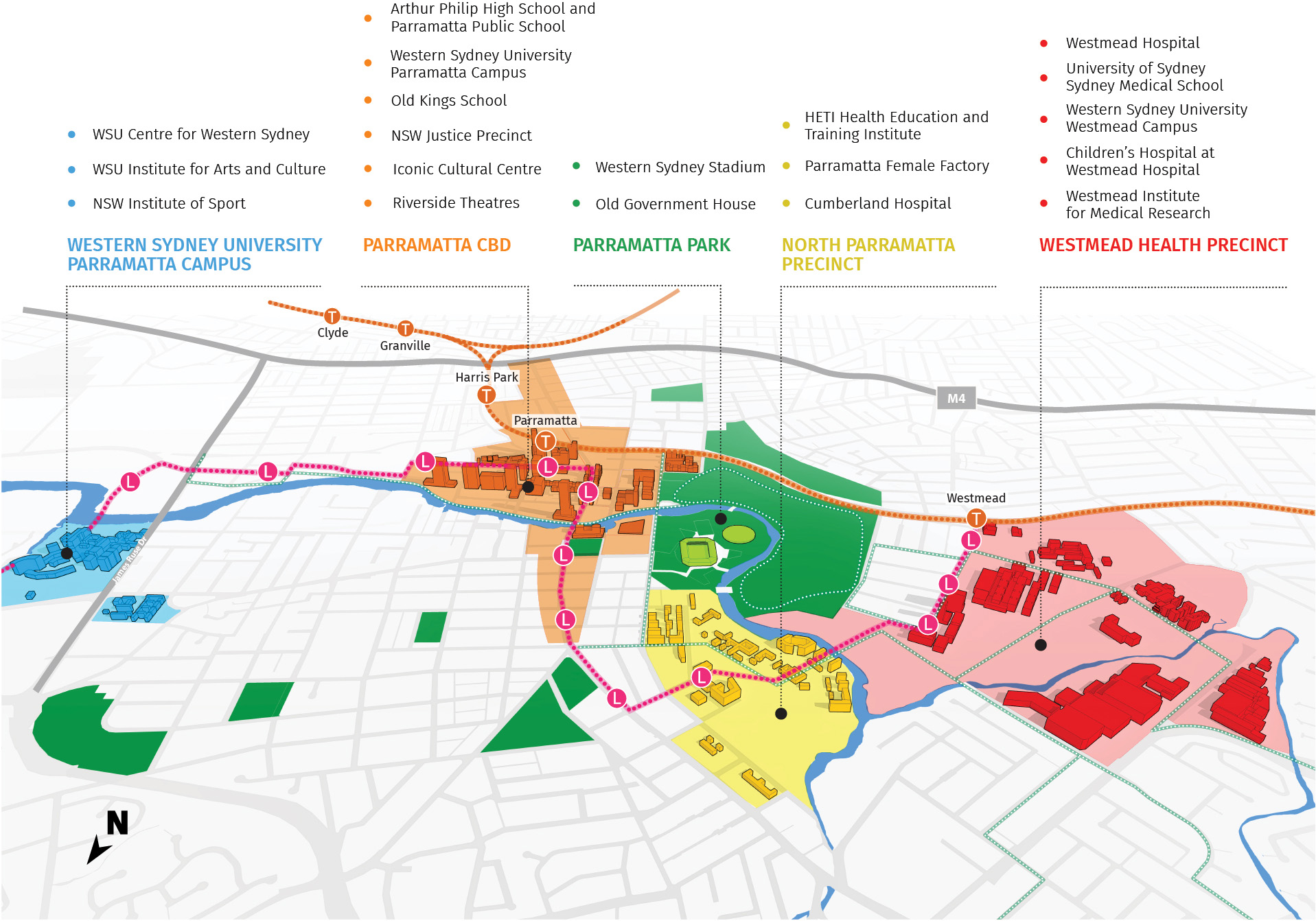 The investment and business opportunities of a location are enhanced when its accessibility to a wider labour pool and other economic agglomerations are improved. For Greater Parramatta, the potential mass transit connections to Macquarie Park, Norwest, the Harbour CBD, Western Sydney Airport-Badgerys Creek Aerotropolis and Sydney Olympic Park, as outlined in Future Transport 2056, would significantly boost economic opportunities with skilled labour and markets that are currently constrained

Develop and implement land use and infrastructure plans which strengthen the economic competitiveness and grow its vibrancy by: