By 2036, the number of journeys across Greater Sydney is projected to increase to 15 million trips a day (up 36 per cent from 2016). To address this increase, Future Transport 2056 includes plans for quick, efficient and more localised connections to jobs, schools and services. A key outcome is for more people to have 30-minute public transport access to one of the three metropolitan centres/cluster and to services in their nearest strategic centre seven days a week. This requires the integration of land use, transport and infrastructure planning. Co-locating jobs and services, improving transport efficiency and creating more efficient freight networks will also improve productivity. Enhancing transport connections to adjacent cities and regional NSW will strengthen economic links and provide more opportunities for long-term growth management.

Greater Sydney is Australia's financial capital with the location of the ASX (Australian Securities Exchange) and the Reserve Bank, the headquarters of the majority of Australia's top 50 ASX-listed companies and the highest concentrations of professional workers of any capital city in Australia. The Eastern Economic Corridor between Macquarie Park and Sydney Airport alone accounted for 24 per cent of Australia's growth in GDP in the 2015-16 financial year. The scale of Greater Sydney's economy is highlighted in Figure 27 and Figure 28.

Greater Sydney also has a strong global advantage in education, being the second biggest exporter of higher education in the world, behind London. It has two of the world's top 100 universities20. In addition, Greater Sydney is linked across the world by its medical research institutions at Westmead, Randwick and Royal Prince Alfred hospitals and at the Australian Nuclear Science and Technology Organisation. There are significant productivity benefits from growing health and education clusters to innovation districts (refer to Objective 21 and Figure 38).

Productivity is boosted by Greater Sydney's high liveability and international tourist appeal. The region is instantly recognisable by icons including the Sydney Opera House, the Sydney Harbour Bridge and the Greater Blue Mountains World Heritage Area.

Electronic and medical devices are high-growth industries in the advanced manufacturing sector and exports of elaborately transformed manufactures have recorded significant gains in the two years to 2015-16.

Efficient trade gateways and freight and logistics networks are required for the region to be more internationally competitive. The development of Western Sydney Airport as a 24/7 airport to complement Sydney Airport will enable Greater Sydney to accommodate significant projected passenger growth. In addition, it is likely that Port Botany will need to be complemented by Port Kembla to handle the projected growth in shipping trade, especially containers (refer to Objective 16).

Greater Sydney is at a stage where changing its structure, from one city on the eastern edge to three cities, is needed to maximise economic growth and cater for population growth. The strong eastern bias in the location of its main economic attractors and job types, means many residents in the growth areas of the Western Parkland City are increasingly remote from these activities and have less choice of local jobs and other opportunities.

A Metropolis of Three Cities outlines Strategies and Actions to rebalance opportunities for all residents to have greater access to jobs, shops and services. International experience shows that sustained actions are required to achieve the benefits of a polycentric region.

By rebalancing as three cities, Greater Sydney will broaden its global economic footprint to support net jobs growth of 817,000 to 2036. This will occur not only in the east, but west of Parramatta largely arising from the Western Sydney Airport and Badgerys Creek Aerotropolis. Currently 49 per cent of Western Parkland City workers commute to other parts of Greater Sydney compared to only nine per cent of Eastern Harbour City workers (refer to Figure 26).

Greater Sydney's major centres, defined as metropolitan and strategic centres in this Plan, account for 50 per cent (2011) of all Greater Sydney's jobs and therefore play a significant role in providing jobs close to home. When larger local centres are considered, this increases to 68 per cent. Facilitating the growth of new metropolitan, strategic and local centres will be important in growing jobs, particularly in the Western Parkland City.

A Metropolis of Three Cities requires a well-connected Greater Sydney with new jobs, shops and services in well-located centres connected by efficient transport and safe and convenient walking and cycling routes. This creates a 30-minute city.

A 30-minute city is where most people can travel to their nearest metropolitan centre or cluster by public transport within 30 minutes; and where everyone can travel to their nearest strategic centre by public transport seven days a week to access jobs, shops and services. This is integral for economic competitiveness and will make Greater Sydney a more attractive place for investment, businesses and skilled workers. The percentage of jobs accessible by different modes in Greater Sydney's districts are shown in Figure 25.

A 30-minute city requires a structure within the three cities that builds on the network of strategic centres, particularly those with health, education and large commercial assets, which provide opportunities for strong economic growth.

With a need to create 817,000 jobs over the 20 years to 2036, it is important to clarify where employment and economic growth should occur and the role of government in supporting that growth. There are a range of locations that are being planned for, including: centres, corridors, industrial and urban services land, health and education precincts, office precincts and interchanges. Planning for these areas needs to consider the factors that influence the location of businesses and jobs.

Many businesses and services seek to locate close to the populations they serve - from shops, schools and local health services to urban services which range from motor mechanics to waste management. Planning policies need to provide the conditions for businesses, services and an efficient transport network to align with population growth. This will drive local employment for local communities. Job targets for metropolitan and strategic centres are an important tool in highlighting opportunities for investment and business growth and providing context for centre planning.

Delivering A Metropolis of Three Cities will be achieved by investments in infrastructure that are integrated with targeted land use decisions. This is particularly important in the Central River and Western Parkland cities which need more local jobs.

Western Parkland City: The Western Sydney Airport will be the economic catalyst to transform the Western Parkland City over the next 40 years. It will attract globally significant defence and aerospace activities, and have significant freight and logistics strengths. The development of a new Western Economic Corridor with north-south access for the Western Parkland City and the Western Sydney Airport and Badgerys Creek Aerotropolis at its heart, will agglomerate the economic activities of the city. The established centres of Liverpool, Greater Penrith and Campbelltown-Macarthur will be critical locations for commercial and retail businesses and health, education and other services as the city grows. The Western City Deal will drive the delivery of these outcomes.

Central River City: Economic growth will leverage the world-class research activities of Westmead Hospital by creating a unique innovation cluster based around this and the other health, education and research institutions and the growing professional, business and administrative services of Greater Parramatta. This will be supported by $10 billion of public and private investments in Greater Parramatta and potential new transport connections to skilled labour markets and the surrounding centres of Macquarie Park, Norwest, Sydney Olympic Park and Bankstown.

Eastern Harbour City: Ongoing investment and new opportunities for businesses will be needed for the continued growth of the Eastern Economic Corridor. In addition, agglomeration of benefits from the assets on the western edge of the Harbour CBD such as the universities, tertiary teaching hospital, international innovation companies and fast-growing start-ups will support an Innovation Corridor. Growth will also be supported by protecting the operations of the international gateways of Sydney Airport and Port Botany including the landside transport network.

Improving connections between the three cities will maximise the productivity and competitiveness of Greater Sydney.

By 2056 the wider region including Greater Newcastle, Central Coast and Wollongong will have a population approaching 10 million. Research suggests that enhancing connections between regions can create opportunities to grow economy-of-scale advantages and increase opportunities for specialisation and complementary sectors and potential growth management choices for the long term (refer to Objective 17). Over the life of this Plan, these connections will become more important as Greater Sydney will increasingly rely on access north and south to these areas. In the short term the initial objective is to protect these corridors (refer to Strategy 14.2).

8. Support the growth of the Camperdown-UltimoCollaboration Area (refer to Objective 18).

9. Collaborate to deliver the Western Sydney CityDeal (refer to Objective 20).

10. Facilitate the whole-of-government place-basedoutcomes through Collaboration Areas for targeted centres, including Liverpool, Greater Penrith and Randwick (refer to Objective 21).

11. Review and plan for industrial and urban services(refer to Objective 23). 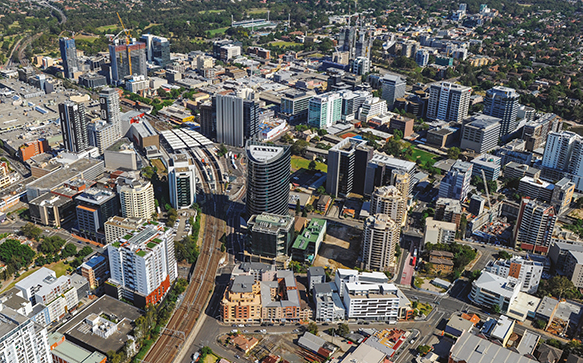